A tiger with toothache is tucking in at mealtimes again thanks to MyVet.

A team of specialists was assembled to ensure the highest level of care throughout the procedure, which was carried out on site at Dublin Zoo. 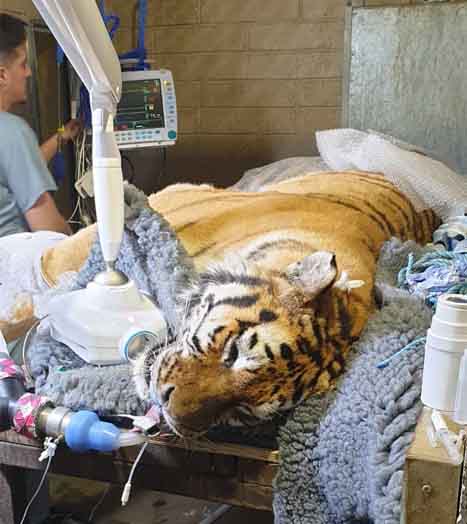 Nora, who has 15 years’ experience in veterinary dentistry, said: “Fracturing teeth is not an uncommon issue for big cats because they eat and chew very large chunks of meat, but it can cause real problems if it goes untreated.

“Just as with human root canal procedures, this treatment involves the removal of damaged tissue, filling the cavity and sealing the crown with a filling, which protects the inside of the tooth against bacterial invasion.”

Due to Tundra’s super-sized canines, the team had to upscale their operating theatre with large tools and a lot of sealant, while the surgery itself took a total of six-and-a-half hours to complete.

Nora said: “We had to be prepared for cleaning out a canal that was very wide, so we had a big set of files to hand.

“We also had to adapt our usual way of working to fill the canal by mixing sealant in a large syringe and distributing it with a long canula.

“We filled one tooth at a time, with the first surgery taking about four hours to complete, mainly because it was challenging to stabilise Tundra under general anaesthetic.

“The second surgery was much faster at two-and-a-half hours, and I’m pleased to say both were successful.

“It was a real team effort to ensure the surgery went smoothly and we’re all delighted to see Tundra is enjoying mealtimes again.”

Learn more about our emergency services