A young puppy had his intestines removed

Arlo, a young pup needed 15cm of his intestines removed after suffering a dangerous blockage caused by chomping down bones that had been given to him as a treat.

Fragments of the bones built up in the nine-month-old border collie’s small intestine, causing significant damage and a worrying loss of blood supply.

The poorly puppy, called Arlo, was taken to MyVet practice in Firhouse, where vets Gillian Johnston and Claire Meaney provided the expert care.

Gillian explained: “We carried out a clinical examination and X-rays of Arlo’s abdomen which revealed lots of small bones causing an obstruction in his small intestine. 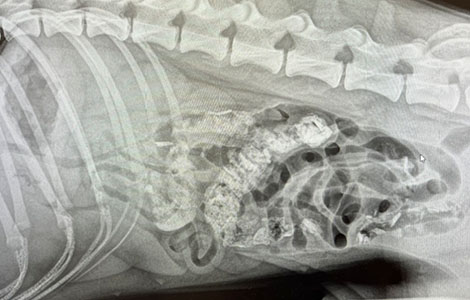 “It was a very challenging scenario as there had been significant trauma and loss of blood supply to the area.

“This meant that, rather than just remove the obstructive material, we had to remove 15cm of Arlo’s small intestine.

“To achieve this, we had to perform an exploratory laparotomy to open his abdomen and investigate the area of obstruction.

“We did attempt to make an incision into the small intestines to milk out the obstructing material however the damage was too severe, so the diseased area of gut had to be removed and the areas of healthy gut stitched back together.

“Surgery lasted around 2.5 hours and was very difficult as there was a high risk of contamination of the abdomen but everything went well.

“Arlo was then hospitalised where our nursing team gave him intravenous fluid therapy, pain relief and antibiotics.

“He’s since made a wonderful recovery and is back to his happy, bouncy self, although after his scary ordeal, he no longer gets bones as treats!”

Sarah confessed: “We were very concerned. Your pet is like a child, all you want is for them is to be healthy and happy.

“We’d noticed Arlo had lost some weight and had planned to bring him to the vets for a check-up but the night before he was sick and became acutely unwell, so we knew we had to take him in straightaway.

“We had suspected there was an issue but we didn’t realise how severe it was, so we were a bit shocked and upset with the diagnosis.

“We used to give him dog bones to chew and some small bits of bone had become lodged in his bowel and created a blockage, which just continued to build up over time.”

A relieved Robert is full of gratitude for the excellent care and treatment Arlo received from the MyVet team. 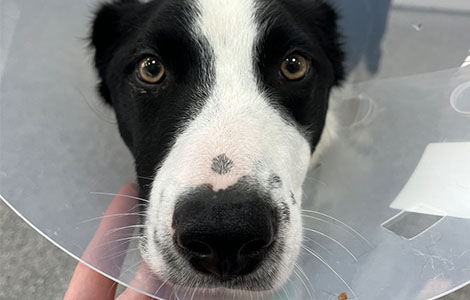 He said: “They were outstanding, from the minute we brought him in all the way through to all his aftercare.

“The vet who checked him initially was very clear about what examinations they would do, and then when it was decided he needed surgery, they rang and went through the whole process clearly and calmly over the phone.

“Although we were very anxious about the situation, we were very confident that Arlo was in the best hands, and would be very well cared for.

“We’d recommend MyVet without a doubt. Everyone in the veterinary practice were so kind to both Arlo and ourselves throughout the whole experience.

“A few weeks later, I took our cat in for a check-up and I was asked how Arlo was. To me, that’s a sign that people really care for the animals.

“The answer is – he’s fully recovered and back to causing mayhem around the house!”

Find your local MyVet in Dublin and Kildare